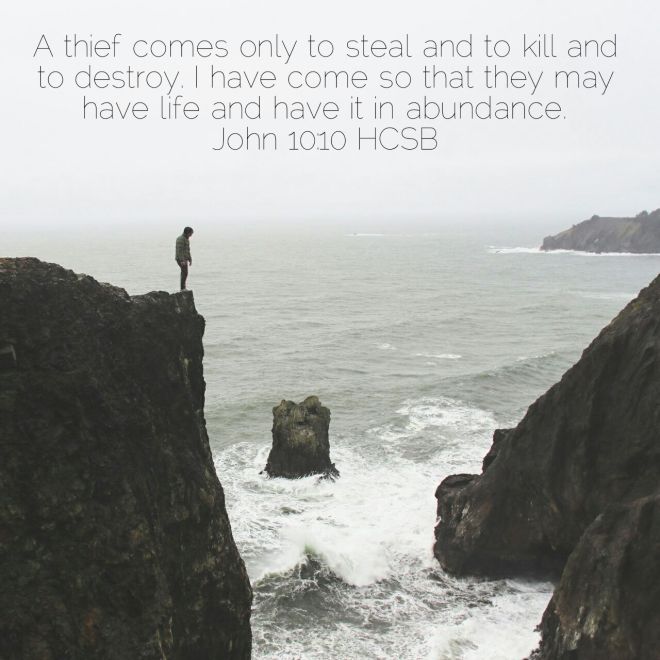 A thief comes only to steal and to kill and to destroy. I have come so that they may have life and have it in abundance.
John 10:10 HCSB

When my church started over ten years ago, they called themselves Crosspoint. Before long, however, they discovered they were not unique, and started getting mail and donations meant for other churches so named. Apparently “Crosspoint” is a common choose for new church plants. So they began looking for a new name, finding it this verse in the New Living Translation, where Jesus promised not just an abundant life, but as the NLT puts it, a better life. That stuck, and so John 10:10 has been the theme verse of Better Life Church ever since. (See betterlife.church).

Sounds like an amazing verse, maybe even a good theme verse, but what does it mean? The context clues here are minimal. You have to pull your focusing from just this verse to find that Jesus is talking about shepherding. Jesus is borrowing his analogy from herding sheep. Wow. So how do we get from herding sheep to a better life? I’m this verse, Jesus contrasts the intent and work of the thief and the shepherd. The thief’s only concern is how many sheep he can steal and even destroy for his own gain. In those days, sheep were a valuable commodity and resource. They did not Brand sheep as they do cattle today to establish ownership. Sheep were also fairly dumb, and would do just about anything you could lead them to. Sheep easily wander off. But one thing sheep can do is recognize the voice of their shepherd. At the end of the day, shepherds would round up their flock and need them into a sheepfold, and he would close the door of the Sheffield behind him to keep them in.

Jesus also said, “I am the door”, referring to this method of ingress/ egress from the sheep fold. He likened the sheep fold to being in the church or the kingdom and the pastures to be the outside world. Jesus alone is the only way into the safety of the Kingdom.

Jesus also said, “I am the good shepherd”, referring to this role. He is the Voice of the One calling the sheep, the staff of whom protects them from evil, and from the thief. Jesus is the Shepherd agonists down His life to protect the sheep. While Jesus is the Great Shepherd, He calls men to be His assistants, also called shepherds. We Anglicize  the Greek term and call them “pastors”.

With its context in mind, Jesus’ more abundant life is in contrast with the death and destruction offered by the thief. While the thief offers death, Jesus offers life. The person behind the thief should be obvious: it is the Enemy. He has no interest in the life of the sheep but only in what He can get from them and the damage he can cause for God’s people. His death is eternal death. Jesus offers life, life of abundance (for sheep that means green pastures and still Waters and plenty of it). So what does this mean for the Christian? You will never run out of what you need. He is faithful to supply everything He decides as a Shepherd that you need. He knows what you need at every moment, even if you don’t. Because like sheep, we don’t always know what that is. But He works to meet our needs before we even ask because He knows us so well. The flipside of it is this; if we don’t have it, we don’t need it yet.

The promise of Better life, more than we could dream of, is also trust in the Shepherd to foresee and supply at the right time. That takes a lot of trust from the sheep. Can we depend on the Lord to provide at the right time? That is the better life He offers.

Well, I hope you have a good day. May God give you exactly what you need at the right time. 😃