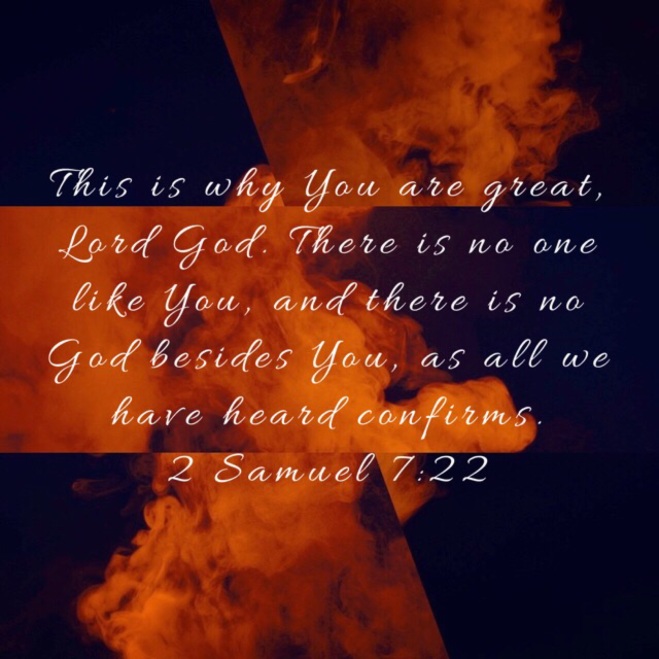 We’ve been used to monotheism for so long we have taken it for granted. How could anyone believe in more than one God? And yet, in the culture of 2 Samuel, belief in multiple God’s was common. Every nation had its own god. I believe it has something to do with the dispersion of Noah’s family. The first few generations were larger than life, and became rulers of their families and territories. As such legends about their origin sprang from their actual histories, and from these legends, myths. Soon, great-grandfather, who was still alive and ruling after hundreds of years took on divine qualities and when he did die, he was elevated by his progeny. Statues were erected and children were raised on stories of his exploits. These regional rulers became the pantheon, and by David’s day, they were the many gods that competed with the one true God of Israel. Only in Israel did ancestors keep from becoming gods. No one worshipped Noah or Abraham, it only because God demanded worship for Himself alone.

As we read Scripture we find this uniqueness of God. He is alone. No other god compares with Him in love, grace, and the capacity for self-sacrifice. No other god loves us with such intensity that He sacrifices His own Son to save us from sin. Sure, the other gods have no problem punishing for sin, but none other sacrifices so much to save us. Our God is unique, and He is the only God we need worship for this reason.

May God bless your walk today as you hold Him up in worship.