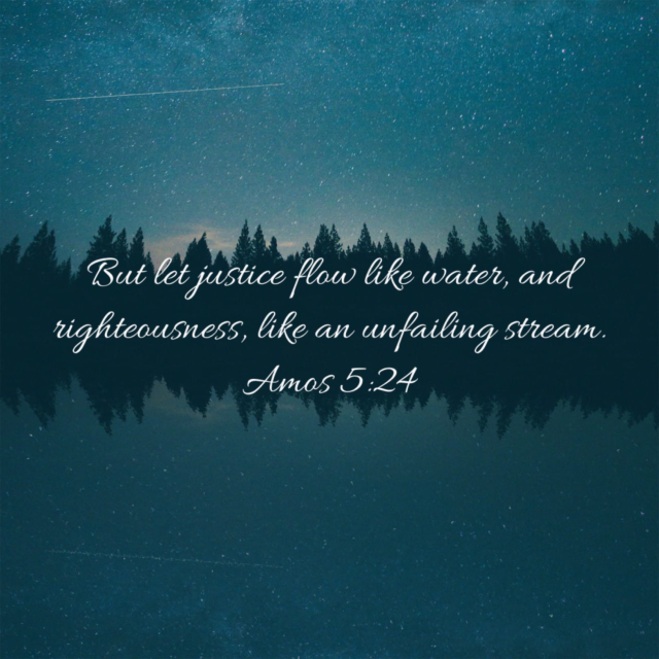 So I’ve been working on laundry and housework today. Been singing a couple praise tunes, but nothing profoundly spiritual. Kids are out of school today for the holiday. I’ve got a half-day since our census is down at the workplace. So I’m sitting here trying to think of something profound to say.

Justice seems to be the theme of the day, right? With Trump’s impeachment trial in the news, and Virginia’s gun issues all over the headlines. People are looking for justice. But then there is also this holiday, which seems to me to be more about civil rights than about Martin Luther King, Jr. today. I mean, what other civil rights advocates got to have a federal holiday? MLK had the advantage of being a martyr, but there are plenty of civil rights advocates that have done as much. Emmett Till didn’t get to grow up to be a great speaker. Malcolm X was just mean. Louis Farrakhan is trying to be the next MLK but he’s in the wrong religion.

And what are they preaching about justice today? In short, it is to hold the sons accountable for the sins of the fathers. Specifically, modern advocates of “justice” want to take away from those that have and give to those that have not because of the belief that the “have not’s” are poor because they didn’t grow up with the same advantages today that the “have’s” did. Therefore “justice” is wealth redistribution on the premise of historical bias.

Do you know why there is such a thing as “white privilege”? It is because white families tend to keep their fathers around longer than black families. Why do Asians do so well, even better than whites? Because Asian families have an even higher expectation of their children than whites do. When you look beyond the race issue, you find families that are suffering because the traditional nuclear family no longer exists for many children. If you have a successful black man, you will find a successful family behind him. You will find a family that had high expectations for their child.

“Social justice” isn’t an attempt to make a level playing field. It’s an attempt to rehabilitate the War on Poverty of Lyndon Johnson. He believed that if blacks learned to depend on government, and replace the father with a welfare check, blacks would vote for democrats in perpetuity. So far, he’s been proven right. It’s human nature. If you are handed something without working for it, you will fight to defend your right to receive it, because you “deserve” it. No one has a greater sense of privilege than someone who didn’t have to work for it. Ask rich kids.

Is this a rant? Yeah, probably. I frankly despise anyone who cloaks family breakdown and economic disadvantage with skin color. America is the freest country in the world when it comes to economic opportunity and faith. That’s why she is most harshly attacked in these areas. If justice flowed like water and righteousness like a river these other problems would disappear in a generation. If we were right and just and fair with each other, if we acted with integrity with our fellow man, “racial inequality” would vanish. If we practiced that simple Christian principle of “think of each other more highly than yourselves” what good could we accomplish?

Father God, we are wise enough to realize that we have not done well as a nation. Our fathers committed sins that we are still paying for. I know there is anger on all sides of these issues, and to stir up the embers of old fires isn’t helping anyone. Father as your people, whether our skin is white, black, yellow, red, or green, we know you did not make a “master” race, because all of us are made in Your image. Help us to remember that it is not about the color of skin that makes us special, but the cost for our souls. May we remember that we were bought with a price, not with gold or silver, but with the precious blood of Jesus Christ. It is the value of His sacrifice that makes us valuable. It is the cost of His blood that makes every life costly. Help to remember all of these things and grant us wisdom to deal with our fellow man with gentleness and respect, regardless of their skin color. We pray these things in Jesus’ Name, Amen.

In some of my reading this week, I came across this word “justice” as in as Chaplain we are to pursue justice for our patients. Immediately my mind went to some kind of “Chaplain PD” where we went after bad guys and brought bad actors to justice. But I have a feeling that’s not what was intended. No, the more modern concept of justice is about equality, not just equal under the law, but equal pay, equal work, equal rights, equality in marriage (same-sex), equality in taxation (or more taxes for more wealth) and so on. Justice has taken on very different meanings since the Bible was written.

Justice in the Bible is about God’s Justice, and that is a very scary thing. God is the standard of justice for all its forms. God is the absolute standard for right and wrong. There is no higher power. So when God is spoken of as upholding justice, it is according to His own eternal standards.

So when God guards the paths the justice, this is to say He ensures that justice, His justice, will be done. Justice over sin will prevail. His absolute justice will be served. Can it include economic and social justice? Probably, but in terms He has already laid out for us. If you need a refresher on Biblical Social Justice, I don’t suggest listening the latest pundits. I suggest going back to God’s Word. In short, everyone and everything belongs to Him; we are stewards and will be judged by our stewardship of His resources.

Good talk. Now get on with your day. God bless!

Amos seems to be all in when it comes to justice. He wrote these words over 2 and a half millennia ago. The voice behind the words comes from God, who is expressing frustration with the Israelites lack of sincerity in their worship, as their hearts are following false gods and idols. Their worship of God is perfunctory, a duty to be performed rather than a privilege. They would rather be somewhere else while in the Temple of God. Sound familiar?

So the call for justice isn’t about making sure everyone gets a $15/ hr minimum wage, or everyone paying their fair share in taxes. It isn’t about blacks getting equal treatment by cops or that black lives matter. All the recent ink spilled over “justice” has little to do with what God is saying here.

He begins this thought a few verses before in verse 18, asking them why they want the “Day of the Lord” so badly. As far as we can surmise here, they want God’s Day of Justice to occur to mete our punishment on their national enemies, not unlike what we look for today. They were hoping for the Day of the Lord to dish out Justice to all who have burdened them and hurt them so that they would prevail. However, God’s perspective is different. The Day of Justice will not be one of “light” but one of “darkness” for them. They too are in the wrong, and God’s justice will level them as well. His counsel is to work on their own house, being God’s righteousness into their homes and families, into their worship so that they will not be in danger of God’s justice.

Fill your own home and life with the righteousness of God so that when the Day comes, He will not come to judge you too. Good advice. Before you pray for God’s wrath to be visited on your enemies, make sure you aren’t in the way.

Looks like Amos still has something to say to us too. God bless you today!

Nahum? Who is Nahum? I remember Nahum usually when I am trying to put the books of the Old Testament in order, or remembering those twelve minor prophets. Nahum is not a book even dedicated Christians regularly frequent, let alone study. We usually find ourselves in the New Testament, or some stirring accounts in the Old.

But it is with Nahum we read, because Nahum is about justice. This is not the kind of justice that people are shouting for on the street corners, but real, genuine, fire and brimstone justice. Our culture has softened the original by turning it into some distant form of equality, of making the rich poorer and the poor richer. That is not justice. Nor is making some “races” pay for imagined slights against other “races”. Our culture has so totally ignored the real purpose of justice that we would actually see real justice as cruelty.

The justice that Nahum has in mind is for the kingdom of Assyria, a nation that had been on God’s radar for some time (remember Jonah?) and had at one point responded positively to a message of repentance. But that time had passed. Now Assyria had ransacked the northern tribes of Israel and had its sights set on southern Judah. They were a nation reknowned for their cruelty and destruction, and God had now sent a word through Nahum of judgment and justice against their crimes against His people.

As Christians we are surrounded by this culture of cruelty, and we are calling out to God for justice against it. They have slaughtered children in the name of convenience, allowed perversion to become normal, and the time-honored marriage tradition to become sullied by the same. We see honorable men and women maligned in public and our hopes dashed for Christian men to be our new political leaders. We cry out to God for justice because we see none. Does God still answer out prayers?

Nahum has much to say about God, justice, and judgment. As he writes, “The LORD is good, a stronghold in a day of distress; He cares for those who take refuge in Him.” (Nah 1:7) The call from this letter is to take refuge in God, not in parties or platforms, not in labels or associations, but in the only the sure and strong refuge of the Lord.