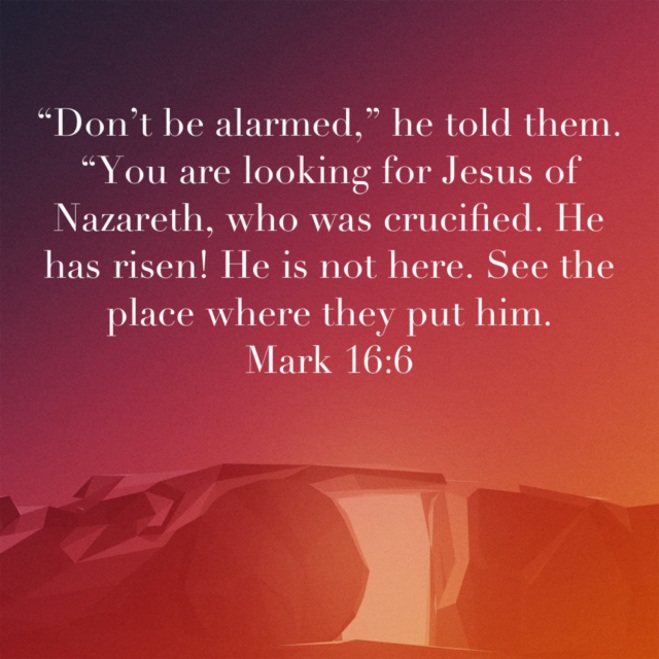 That quiet morning two thousand years ago was disturbed by an event unparalleled in history. While all the authorities were resuming work, the religious elite were pleased with themselves that they had saved their faith from a known revolutionary. The Romans were satisfied they had quelled another potential problem. The disciples of Jesus were huddled together, sleeping fitfully because they were terrified of what would happen to them since they lost their Rabbi, especially how they lost Him. Would Judas rat them all out?

But a few women, who braved the early morning air carrying spices, went out to the tomb. Perhaps to see Him one last time before His flesh rotted away, their topic of conversation on their way was how to roll the stone away. Did they know of the armed guard placed over the tomb? Were they worried they might have to convince a handful of guards to stand aside and let them minister their defeated Master?

But the sight that greeted them that morning was not a closed and guarded tomb.

I’ve always wondered why the gospel writers never talk about the actual event of the resurrection. There is no grand depiction of the stone rolling away, or the great moment when Jesus sits up, or when he peels off the grave wrapping. In an echo of Lazarus’ resurrection, there is no moment in the gospels where we see the risen Lord walk out of the tomb. No, by the time the gospels catch up to the event, it has already passed.

The women come upon an empty tomb, with the stone rolled away, the guards fled, the angels standing there over an empty pallet which once held the body of Jesus. The woman are told calmly and peacefully, “He is not here. He is risen just as He said.” There is a gentle scolding in that statement. Oh faithless followers, didn’t you believe? Didn’t He say He would rise again? Why did you not believe?

The women fled the tomb to tell the others, especially Peter, especially Peter, who of all the disciples most sorely needed to hear this message. Mary of Magdala still didn’t understand, and stayed behind, grieving, how could someone have taken the body? Of all the insults their “leaders” could have played on them, now they desecrate the body of the Lord? That is until the “gardener” shows up for work that morning. Maybe he knows what happened? But when she pours out her concerns to him, he responds with the most beautiful word she could ever hear, because it comes from the lips of the One she loves most, “Mary.” She falls to her feet and grasps them. The angels were right, He is RISEN! He’s ALIVE! Death could not hold Him. Their enemies could not defeat HIM. By the time John and Peter arrive, Mary has already left with her instruction to tell the others. John rushes into the tomb while Peter is still trying to grasp what he is seeing. John’s witness to the empty tomb includes the fact that he saw the graveclothes laid aside, with the facecloth folded up by itself. Jesus’ resurrection body passed through the graveclothes without needed to unwrap them. This is our first clue that Jesus isn’t what He used to be.

Over the course of the day, we see Jesus making various appearances to credible witnesses in diverse situations. Paul says in 1 Corinthians 15 that one appearance was to His brother, James. James didn’t believe in his brother. He didn’t believe in His mission, and thought he was crazy. No doubt he mourned the loss of his brother, but probably thought Jesus got what was coming to Him. He didn’t expect Jesus to appear to him. I wish I was a fly on the wall during that conversation. But the transformation to James was night and day. James not only becomes a believer (and perhaps one of the first converts after Jesus’ resurrection) but becomes a leader in the Jerusalem church and an author of a New Testament book, The Letter of James.

The Day of the Resurrection of Jesus changed everything. His followers were no longer down and out, but out and proud, proclaiming the work of God through His Son Jesus Christ. Jesus wasn’t just a country preacher, but the very God of very God, the Son who speaks the words of God. In Jesus we could all put our faith and our hope, for His return was very soon. We could have hope for the future. Since He rose from the dead, we can rise from the dead. In Jesus is all the hope we will ever need. All of this because of that Easter morning two thousand years ago. I look forward to the future, no matter how bleak the present, because He LIVES!