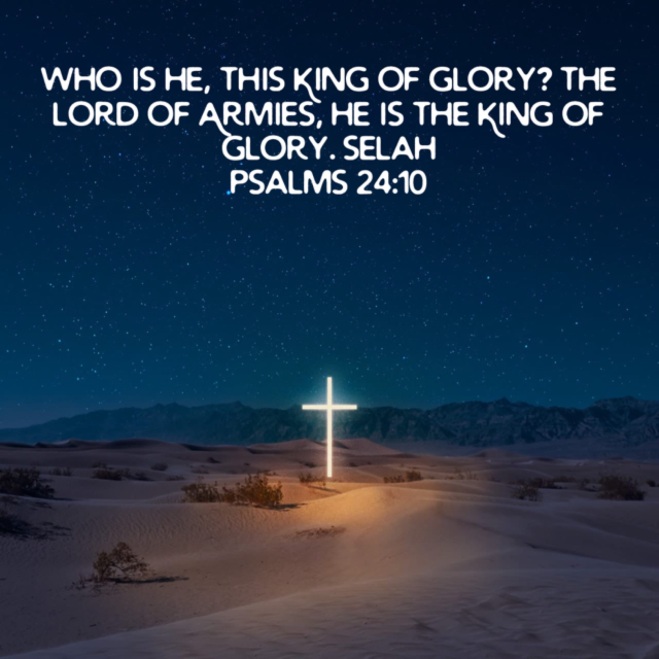 You will see this word occasionally in the Psalms. I have heard it described variously as a pause, a dramatic interlude, or a guitar solo. I think it works best as a moment, a pause to reflect on what was just said. These are some pretty weighty words.

Any king of any age would crave this kind of laud and honor. To be the King of glory. Woah. All would wish to a glorious kings, but to be the King of glory, now that’s something else. But few would pursue the road that would take them to this kingdom. As pictured above, that road goes through the cross.

Jesus is the King of glory, the Lord of armies. Both before and after the cross He could command 12 legions of angels, the fiercest warriors you could ever hope to face. They make SEALs look amatuerish. One angel can kill over 100,000 by himself in one night. 12 legions, well, I’ll let you use your imagination.

On the one hand we would be right to experience fear from this Lord of hosts. He is a fearsome character, and One from whose throne we receive judgment. We ought to fear Him and respect that power and authority above all others. He is the one who commands this virus. He commands life and death. We are subject to Him always, alive or dead.

But this same Lord also came to live among us, to teach us a path of love, and demonstrate that love for us, His love for us, by His death on the cross. And He demonstrates His love by rising from the grave in resurrection. This is love. As powerful and fearsome His power, so is His love. And those 12 legions don’t stand against us, but to defend us from the hordes of Hell. We are His chosen, His brethren and His sisters. We are His if we choose His life over death.