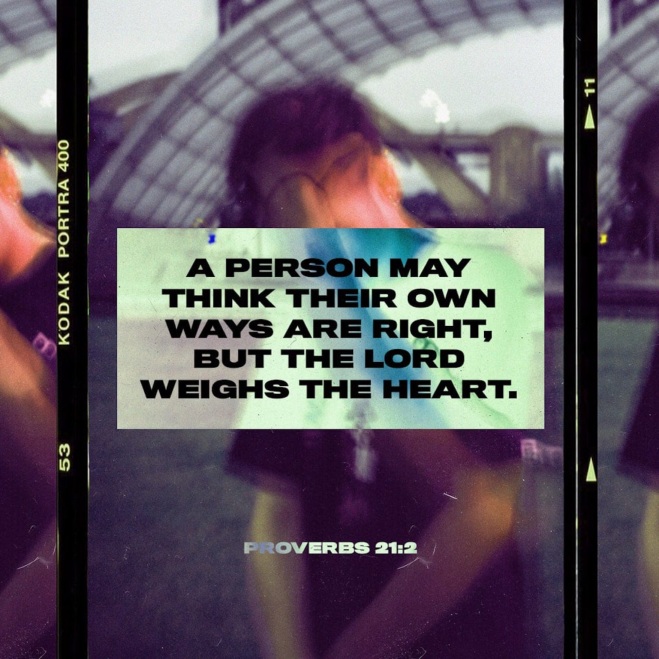 Some scholars propose that this is the idea behind Solomon’s statement here in Proverbs. Perhaps Solomon was borrowing from ”pop culture” much as we do when describing death, like ”buy the farm” or ”six feet under” or something else to cushion the reality that is death. His use of ”weigh the heart” could be a sidelong reference to the Judgment which all men must face after death, as in, ”it is appointed unto men once to die, and after that, the Judgment.”

However, if we take that route, Solomon is referring to something we can do nothing about until it’s too late. Perhaps he is offering a warning. We think our ways are right and good, until they’re not. We need to remember that we are accountable for our actions. There is a higher authority to whom we must answer to.

Other translations interpret rather than translate, saying that the Lord ”examines” the heart, or ”ponders” it. This makes the statement more immediate rather than final. It makes the Lord’s activity more present. He is now examining and we can learn from this examination. There is the chance to repent here from wrong-headed thinking. So that when we challenge our thinking with God’s examination, we have the chance to change.

I believe this is how Solomon is intending this statement. Interpreting this passage for us rather than simply translating it robs us of the cultural thought process of his time. Tell me what the Hebrew says instead of telling me what it means. Let the commentators tell me what it means, not the translation. I doubt Solomon believed in a soul-eating crocodile or a set of scales weighing hearts against feathers. But he employs the picture to remind us of God’s authority over us. We are not our own. We all must answer to our Creator.

Heavenly Father, remind me today of Your authority over my life. I need those reminders because I am naturally rebellious in my thinking. I hate for anyone to tell me what to do. But help me to be humble of heart before You and others. Remind me that I am often wrong and need correction. Help me to see your truth in everything I do. In Jesus’ Name, Amen.