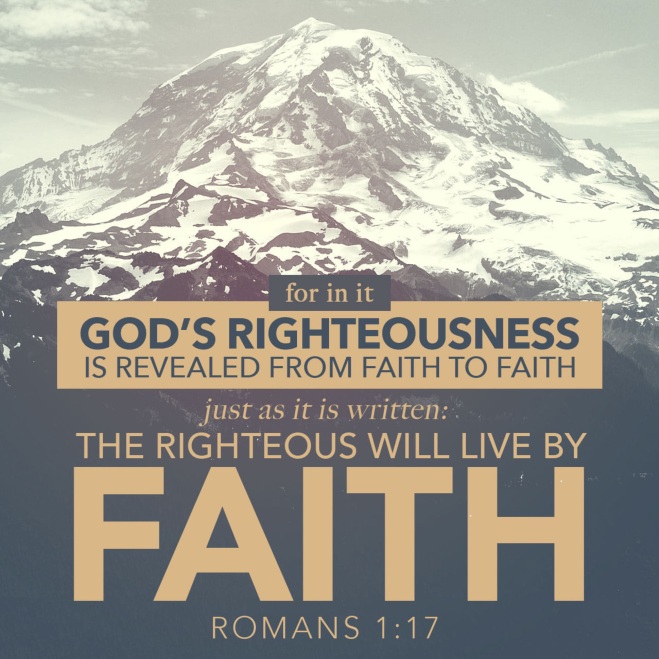 What? I don’t even comprehend what that is supposed to mean. God’s righteousness is revealed from faith to faith. Somehow, this is supported by the OT quotation, ”the righteous will love by faith.” Wow. Ok. Let’s go back and take another look.

The NIV attempts to clarify this by saying ”by faith from first to last”. So what is ”it” in this context? If you go back to vs 16, you find that ”it” is the gospel. God’s righteousness is revealed in the gospel, namely by sending His own Son. Though we were sinners, and could not save ourselves, God doesn’t destroy us as our sins deserve. Because He is righteous, and see us suffering in our sins, He sends he only one who could save us, the incarnation of His Son in human flesh to minister to us and ultimately atone for our sin by His perfect sacrifice. So I get that part. What does ”faith to faith” mean?

For the first faith, we discover that this righteousness is revealed from faith. That is you don’t immediately know why Jesus does what He does, or why He had to suffer. You don’t understand it until you see it with the eyes of faith, seeing past the event itself into God’s work being done just under the surface. To anyone else, it is a tragic loss. To those who have faith, it becomes an act of atonement for all who believe.

So the truth of what’s actually going on is revealed from faith. So what is ”to faith”? This is where the quotation comes in. If the righteous live by faith, then it is to be active, caused by seeing the crucifixion as more than tragedy. This is passive faith, in understanding the facts of the gospel, to an active faith, becoming and living as a Christian. That’s when you claim that righteousness of God for yourself, Christ’s sacrifice for your own. The righteous love by faith, because it is that active faith that appropriates Jesus’ righteousness for yourself, for your salvation from sin. It is faith in the truth of the gospel story to saving faith.

Some folks get to the first and think they are saved. If they just believe in God and believe in Jesus, that’s all they need. They just ask Jesus into their heart or say a sinner’s prayer. But that isn’t active faith, because active faith is faith that acts, first by submitting to baptism, but then by exercising that faith in your daily life, your decisions, in obedience to Christ’s commands, going and fellowshipping with other Christians. It’s a lot. But it’s worth it.

From faith to faith. I knew we could figure it out if we tried. God bless you today.