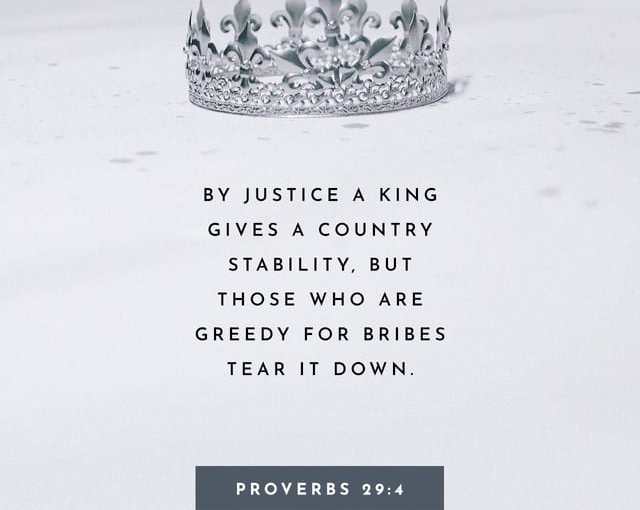 The king gives stability to the land by justice, But a man who takes bribes overthrows it.
https://my.bible.com/bible/100/PRO.29.4.NASB
I noticed as I was looking up today’s “verse of the day” from Youversion that the Christian Standard Bible has an unusual rendering for this passage. Instead of bribes as you see the NASB has here, which seemed a clearer translation, the CSB has “contributions” with quotes. I thought that was an odd choice since that sounded more idiomatic than translation. But then again, I’m not a professional translator, and I don’t know about such things.
What is more clear here is how money affects good governance. Have you ever allowed money to dictate an ethical decision for you? For example, you might continue to work at a job that you don’t like and causes you undue stress and hardship because it pays well. Or you might send your kids to public school instead of private school because private school costs too much. Or you might vote for one politician over another because you were promised free healthcare. As it happens, we allow money to dictate choices to us that we might make differently if money were no object. We do it so often that I doubt we give it another thought anymore.
As you might guess, this becomes problematic when the one making the decisions is in leadership, whether in the home, the church, or the nation. Leaders who allow themselves to be bought become slaves to whoever has the money to buy their favor. Pauk wrote in 1 Cor 7:21 the strongest stance he takes against slavery, “Were you called while a slave? It should not be a concern to you. But if you can become free, by all means take the opportunity.” Also, he writes in Romans 13:8, “Do not owe anyone anything, except to love one another …” Paul opposes the idea that a Christian should be entangled or constrained by economic slavery, including debts. While we may not be indebted to our stressful job or politicians with fake promises, we are indebted to mortgages, car loans, student loans, and credit cards. We are slaves to a bank, and we must keep that job, or make political decisions that allow us to keep more of our money, because we owe. We make these questionable decisions because of debt. We want to be out of it as soon as possible, but we also like the things money can buy, and we accumulate more debt. Paul schools us by saying we need to pay off our debts, and if an opportunity presents itself, to get out of slavery, to which I would include debt slavery.
Several years ago, I was pastoring a church in Illinois as was doing pretty well at it. My wife was starting out as a midwife and having some success at it. But then an opportunity presented itself, requiring us to move to another state, that would enable her to pay off her student loans by moving to a rural area. So with some thought and prayer, we pulled up stakes where we were doing just fine, and moved our household to pay off debt. It was a drastic choice, but I feel a necessary one. Today those student loans are paid off. We have found this new home to be even better than the last one in some ways. But in paying those student loans off, we now have a mortgage, since we moved out of a parsonage. On the bright side, we will have a home when we retire.
But something I want you to take away from this today is this: what role does money play in the decisions you make? Are you making decision based on your Christian values and beliefs, or in how much it costs? Are you allowing economic slavery to dictate to you your decisions, and does this compromise your faith and witness? Does your giving to God reflect your economic slavery or your trust in His ability to provide?
With this thought to keep you up tonight, I leave you with a “God bless” and may you live your life circumspect as you travel today.