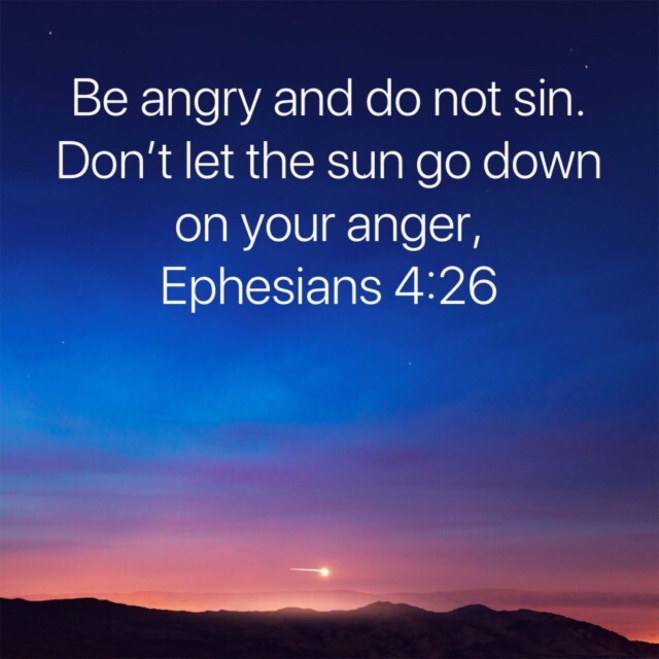 The beautiful thing about this text is the time limit. I love how the verse both gives you permission to be angry “Be angry but do not sin” and then gives you a time limit “Don’t let the sun go down on your anger”. Well.

Anger is not a bad thing. There are many things in this this world we ought to be angry about: injustice, hate, mixing profane with the holy, using God’s name in a casual manner, etc., basically, we should be angry at sin, just as God is. But we should also not to let that anger incite us to sin ourselves.

I was reading yesterday about John Brown, who was a Christian Preacher before the Civil War. It is said that slavery made him angry, and using a text from Hebrews to justify his action (“without the shedding of blood there is no forgiveness of sin”) he killed those who participated in the slave trade. He applied sinful actions, like murder, to respond to sin, which he viewed as sinful.

I may be a bit controversial when I say this, but owning slaves is not against God’s law. He never said “thou shalt not own slaves” but instead gives instructions on how to treat slaves. In those days, slavery was an excellent option when facing extreme poverty. Food and shelter were provided, and you had plenty to do. But slaves were also to be released after seven years, and people sold themselves into slavery to pay off debts, kind of like what we do with credit cards.

John Brown was in the wrong, and used his anger in a sinful way to the harming of others.

I’ve known many people today who do the same thing. But they don’t murder others with their hands, but with their minds. It’s called resentment. You’ve heard the phrase “you’re dead to me”? I’ve seen people carry grudges for decades for past slights. Everything someone does is interpret in the worst possible light. And then that person needs help? Sorry. Can’t. There is no room for “love one another here”. And this is in the church setting. Too much anger held too long kills the soul.

This is why God says “be angry” because that can be a good thing. But don’t be angry for long. Outrage is not a good companion.