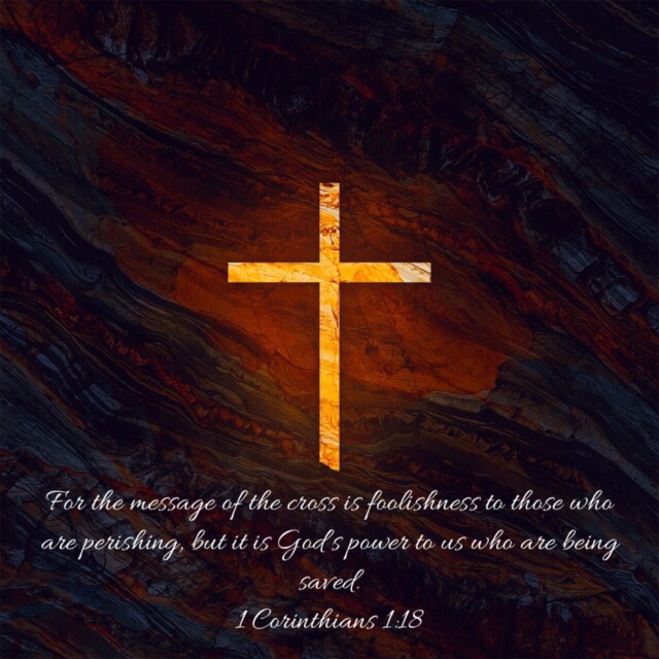 I had the opportunity over the weekend to witness a rare sight, a street preacher in Williamsburg, VA, standing in the middle of the street with a couple of signs declaring God’s position on several key social issues. My kids kept asking me if I approved of the guy’s message, because they wanted to know if this was ok by me. I sat with a sense of personal conflict, not knowing how I should feel. On the one hand, this guy was reading Scripture (albeit the parts about God’s displeasure with sin and the judgment for the wicked) and on the other hand I was repulsed by his chosen means to deliver said truth, with an attitude that said “I am not one of you sinners. I am holy and you are not.”

This verse reminds of the crowd’s reaction to the preaching and the preacher. For one man, it was utter bull**** and he told him so. Another danced around the preacher, mocking him while he talked. For many, His preaching was foolishness. And it was amazing to see this happening in the wild. To see this truth in this text playing out in the public forum.

I would have rather seen this man engaging the crowd, using his context in historical Williamsburg, a place where Liberty gained a footing against the tyranny of the British Empire, or the fact he was standing in a marketplace, or simply engaging the crowd with a simple story, to draw in the interest of the crowd before they rejected him outright by his quoting of the darkest parts of Scripture. It just seemed irresponsible to me, taking the dearest, sweetest message of the gospel of Jesus, and turning it into a call for judgment upon the wicked. As Paul writes, it is the message of the cross, the message that Christ died for our sins out of His love for us that the world considers foolish. It is the preaching of God’s great love expending such great sacrifice for the sake of all of us. And then the preaching of that same Christ rising from the dead. Oh the power and glory of God revealed through the preaching of the gospel message. Foolishness? God’s extravagant expenditure seems foolish. Surely atonement is limited only to those who believe, as even some Christians believe. But God’s foolishness is our gain. This is the message that needed to be preached on the streets of Williamsburg, and everywhere.

I know in that audience Saturday there were Christians of all denominations. Non-Christians who had never known Christ, and fallen Christians, so turned-off by he church and its people that their evil came from their hurt and betrayal at the hands of those who claimed to be saved. Of the three groups, these are who I would preach to, those whose vitriol and hatred comes from their hurt. These are the ones that needed God’s grace and love and would have benefitted from a kind word, not one of judgment.