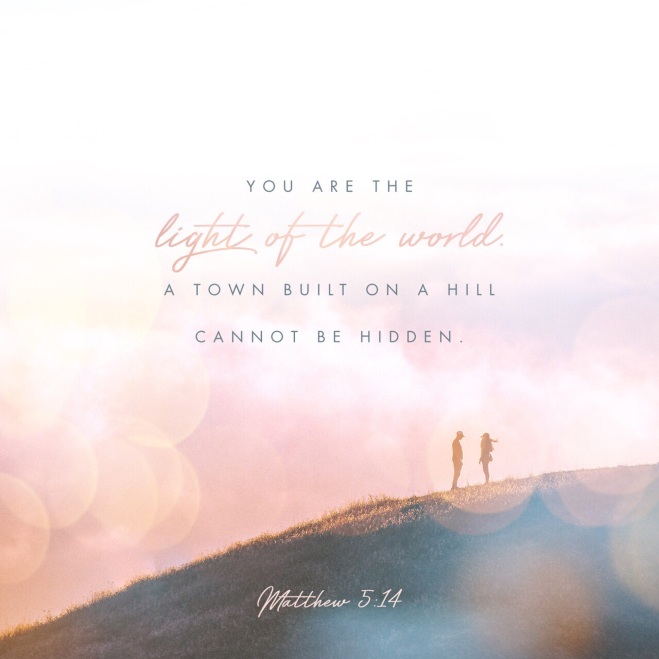 Again, read this verse a hundred times, but never really thought about it. In the midst of Jesus Sermon on the Mount, you read many short statements like this that stack upon each other and lose their meaning after a while. This is one of them. I get and understand the “light of the world” and this is what most people zero in on. Jesus is the Light coming into the World. He is the One who brings Light into Dark places. By Him we have the True Light. Through Him we can share that Light and fulfill the intent of this passage. We too are the light of this world. We offer illumination to those caught in darkness because the torch has been laid in our hands.

That’s why the second part of this verse is so jarring and unexpected.

“A city on a hill cannot be hidden.” What’s up with that?

Suddenly we are thrust into defensive strategies for hill-top cities. If we can’t hide it, how can we defend it? But the stress here is on the obviousness of a hilltop city. Zion was a hilltop city. It was taken only by extended siege, by the Babylonians and much later by the Romans. The problem of a hilltop city is that you can’t miss it. Either in the day or at night. It stands out.

So why put this phrase right here? Since Christians are the light of the world, He extends and changes the metaphor. Christians are also like a city on a hilltop. They ought to stand out against the background. They ought to be lit up at night (in the darkness) so that people who are looking for them can find them. To add to this, Jesus says such a city cannot be hidden. Think about that.

Aren’t there times you feel like hiding your faith? I’ve felt that way, especially as a Preacher, because people treat you differently when they know you are a Preacher. A few years ago, I decided to start wearing a cross around my neck, so regardless of what I was doing, good or bad, I had that thing in front of me, reminding me of who I am and who I belong to. It’s helped me. Because as a Christian, I am a Christian at church as well as at work, at Walmart and the drug store. At home and at play. I ought to like a city that cannot be hid. So should you. Figure it out for yourself, but find something that will help you remember whose you are.