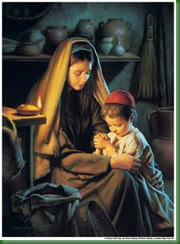 Fallout is defined as the aftermath of a nuclear explosion. It is the consequences of the unleashing so much raw energy after such a powerful event. I was wondering today about the fallout after an abortion.

What I have seen on the Facebook is the accusation against Pro-Life Christians to the effect that Christians, who are pro-life, ignore the plight of poor, hungry children whose parents can’t afford to feed them. That Christians are all for the saving of the unborn, but are apathetic to the plight of poor and under-served children. The narrative goes like this:

Our typical seeker of abortion (we will call her Roshanda, since abortion disproportionately affects the black community) goes to the abortion clinic. She is going because she already has six children and simply can’t afford to have another. Yet the Christians who intervene convince her to have this seventh child. After the child is born, where are the Christians who will help her raise this child, help pay for medical bills, make sure baby number seven has enough to eat? The question is: Why are Christians pro-life until the baby is actually born? Where did the Christians go? Isn’t it better just to let Roshanda have her abortion?

Let me express my imperfect and under-informed opinion for the pro-choicers. The Pro-Choice movement expresses that Roshanda ought not to burden herself with that seventh child, and encourage here to “terminate the pregnancy” (i.e., kill the unborn child) so that she won’t have to suffer. They would want Roshanda to go through with the procedure.

Roshanda instead goes to the abortion clinic. She is told that she wouldn’t want to burden this child with life and that she should just terminate her pregnancy. Roshanda has some misgivings, but the nurse convinces her that she is doing the right thing. She then meets the nurse in the procedure room who preps her for surgery. The doctor flies in, doesn’t talk to her, because he is just going room to room as fast as he can, and quickly begins the procedure. But he cuts an artery (or something else equally significant) and she starts to hemorrhage, and Roshanda is rushed to the ER via ambulance.  Roshanda spends a couple weeks in the hospital recovering from a botched abortion procedure by a doctor that shouldn’t be practicing medicine and an abortion clinic that is not subject to the standards and protocols that EVERY OTHER clinic and hospital is subject to. Now Roshanda not only has an ambulance transportation fee, but a long list of hospital bills, lost wages, money spent now on legal bills because she “abandoned” her other six children while she was in the hospital. Why? Because Child Protective Services noticed there was no parent in the home.

Then, after Roshanda returns from the hospital, she is faced with debilitating depression. Why? Because her hormones, originally gearing her up for motherhood are now flooding her with guilt. Yes, GUILT. She has to go into therapy. Who is paying for her therapy sessions? Who is paying for her hospital bills? Who is paying for her legal bills? And who will pay for her children’s upbringing if Roshanda commits suicide because of her post-partum depression? This one choice has cost her thousands of dollars. Is this equal if not greater than the amount of money most people estimate for the cost of raising a single child? Will the Pro-Choice people step in and help pay for any of these things? Where are the Pro-Choice trust funds for survivors of botched abortions? For the children of those survivors?

Pro-Life Christians promote adoption. Christians promote and run homes for children. We used to call them orphanages. Any child who is left at a fire department, ER, police station, etc. will be placed in foster care. Foster Care is not perfect, but isn’t it better than death? Is there evidence that some Christians abandon some children after they are born? I’m sure you can find some. But is there any evidence that the Pro-choice people help with the survivors of abortion and their families when things go wrong? I don’t know much, but I doubt it. I believe you will find that Pro-Life Christians in general support and assist children in far greater numbers than the Pro-Choice folks do for those that have an abortion.

Just my thoughts on the subject.